Ever since I heard this was possible, I've been eager to try it out, but sadly we don't have Kool-Aid here in Norway. Lucky for me, my friend Pickle decided to send me a bunch of packs to try out! 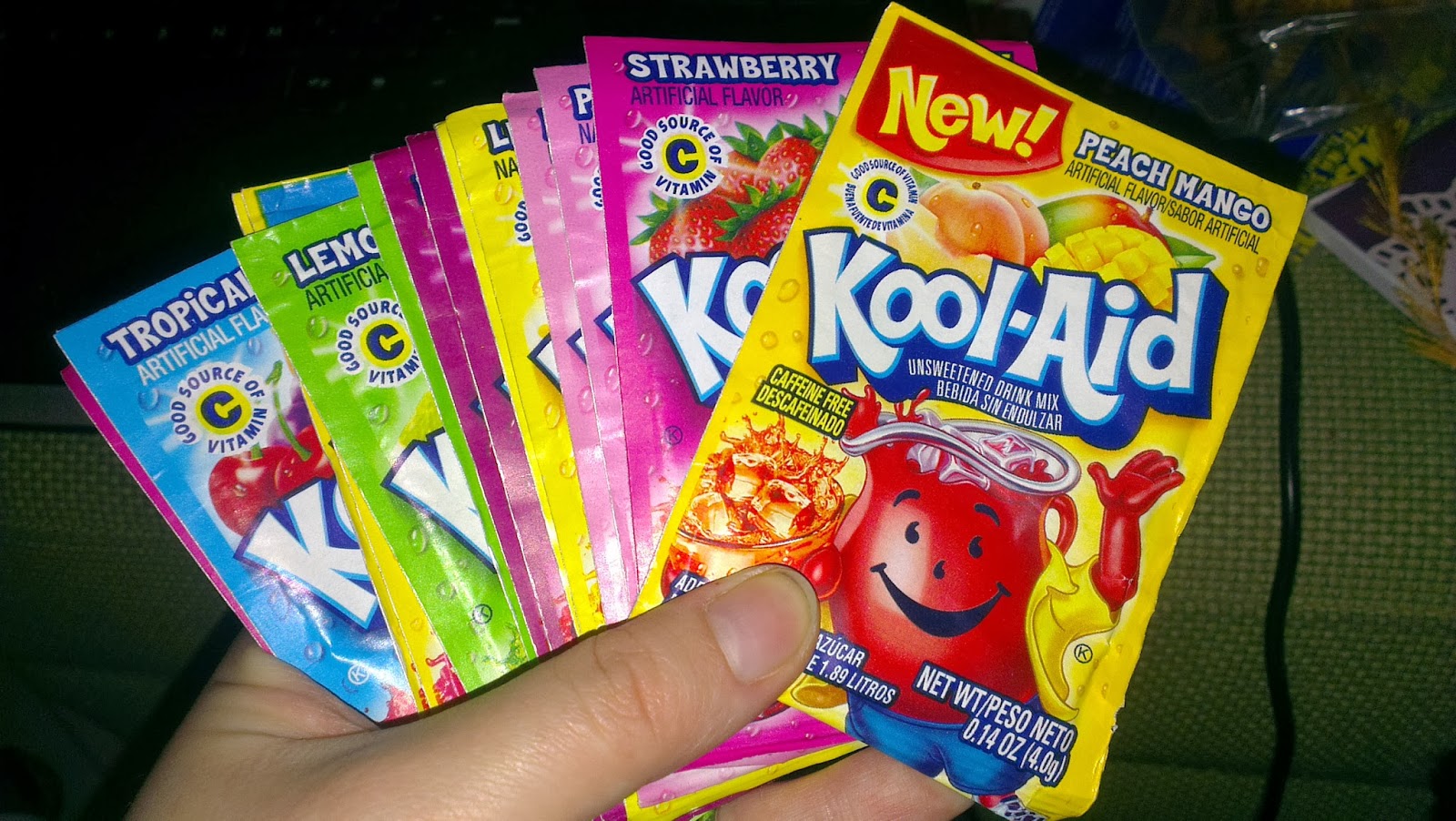 Even though I like the concept, Kool-Aid ain't the thing for me it seems like. The few I've tasted so far haven't been all too good. I haven't tried them all yet, so I might like some of them, I just gotta get to actually try them... But still, there was some that I didn't like, and since I got multiple packages, I decided to use some of them for yarn dying!

So, last night, after watching a bunch of videos about the prosess, I decided to give it a go! Now, I didn't have much white yarn to choose from, so I took two skeins of beige, thinking that I could maybe use it for socks later on. These are Trysil Garn Superwash from Europris. I chose superwash just in case. I don't trust pure wool in warm water no matter how little I'm going to touch it.
The important thing to remember when dying yarn is to use animal fibers. The colors won't stick to synthetics. While cotton and bamboo is natural, they still won't suck up too much of the colors, so the best way is the animal way; wool, alpaca, merino, mohair. Another thing, blended yarn will only partly get colored. If you're trying to dye a 70% wool, 30% nylon yarn for an example, the nylon strands will not get colored, while the wool fibers will, and it may give a cool effect. 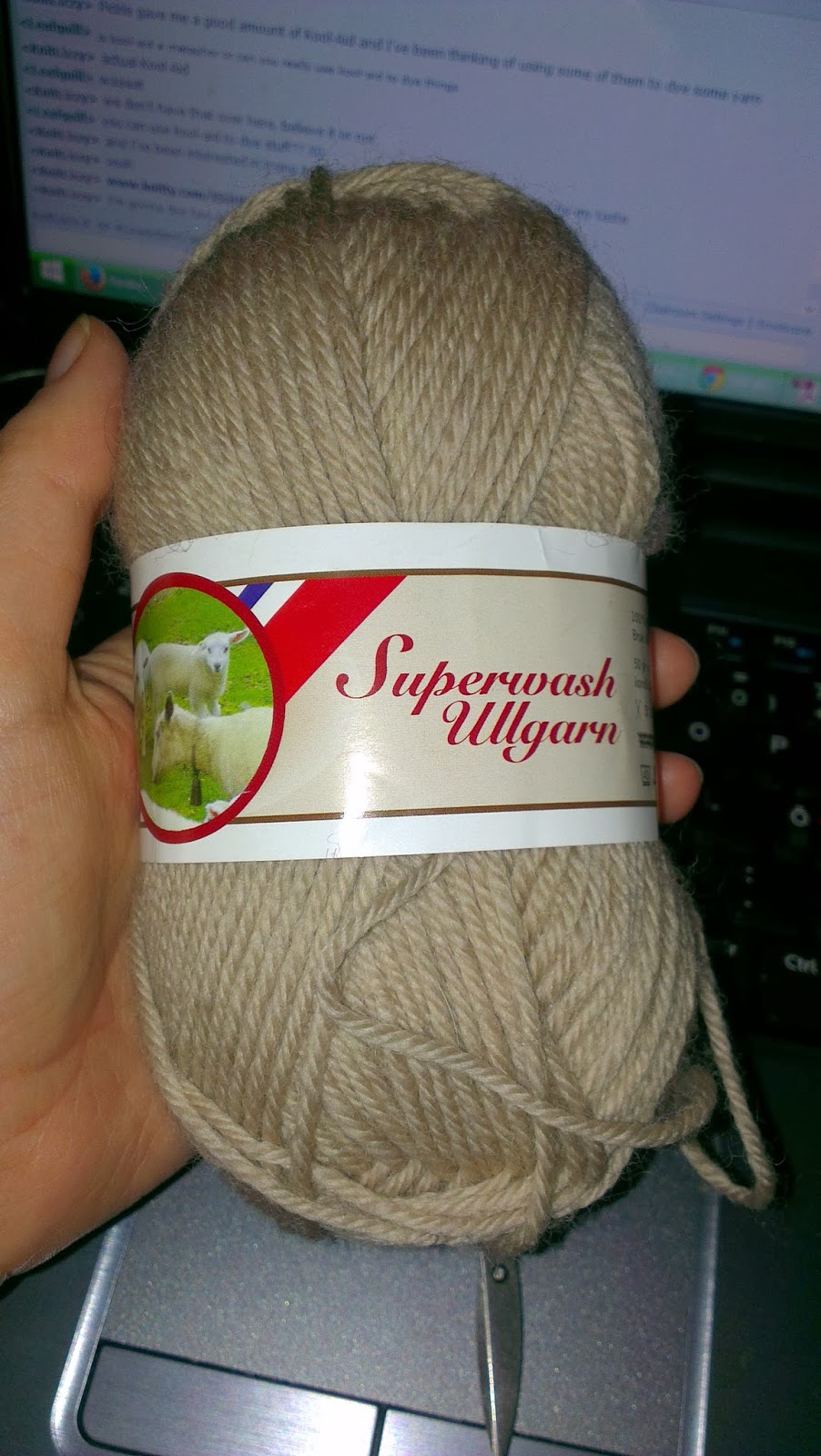 I decided to try the cake method. Usually you want them in loose tied skeins to get the color as evenly spread as possible, but I saw this one woman using yarn cakes to get an uneven color through the skein, which I think gives a pretty effect. I winded up the two skeins and tied them up with some acryllic yarn just in case. 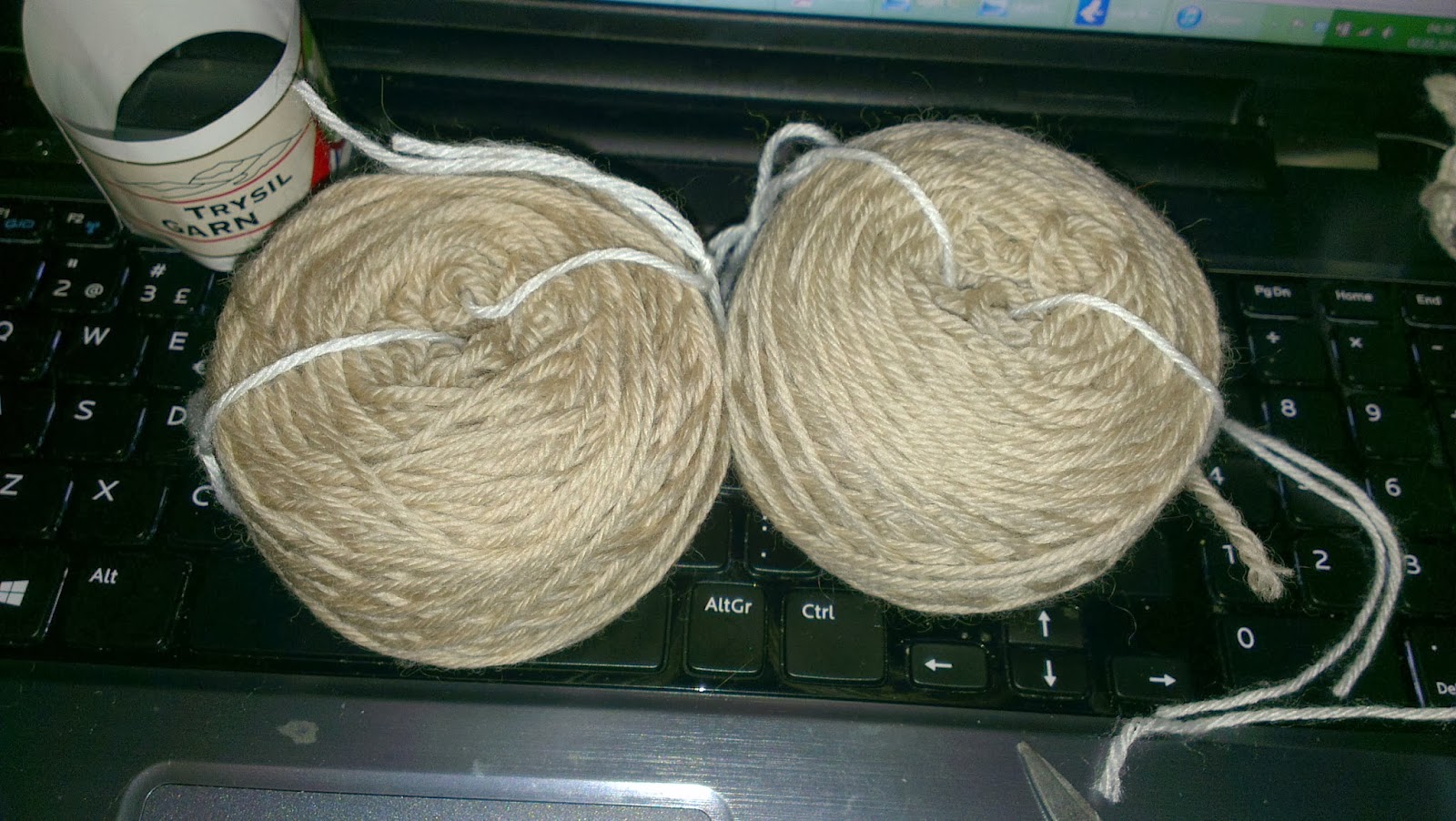 To get the color all through the skein, I put them in room temperature water for about 20 minutes. Usually with yarn dying, you want to add some vinegar to the water at this point, or else the color wont stick very well. But since Kool-Aid is so danged acidic allready, it's not needed here.
After a good soak, I put the cakes in a microweave safe container. 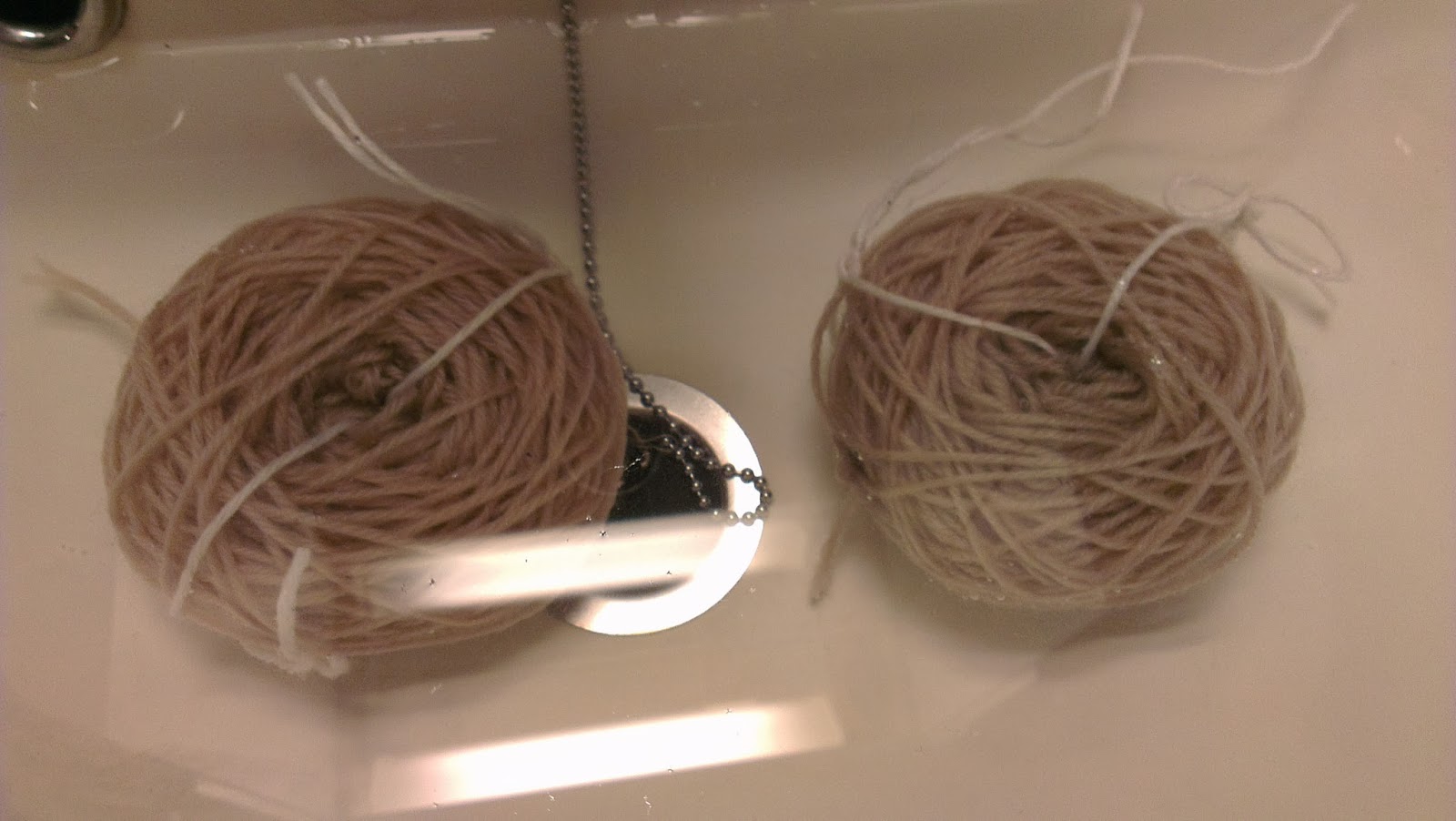 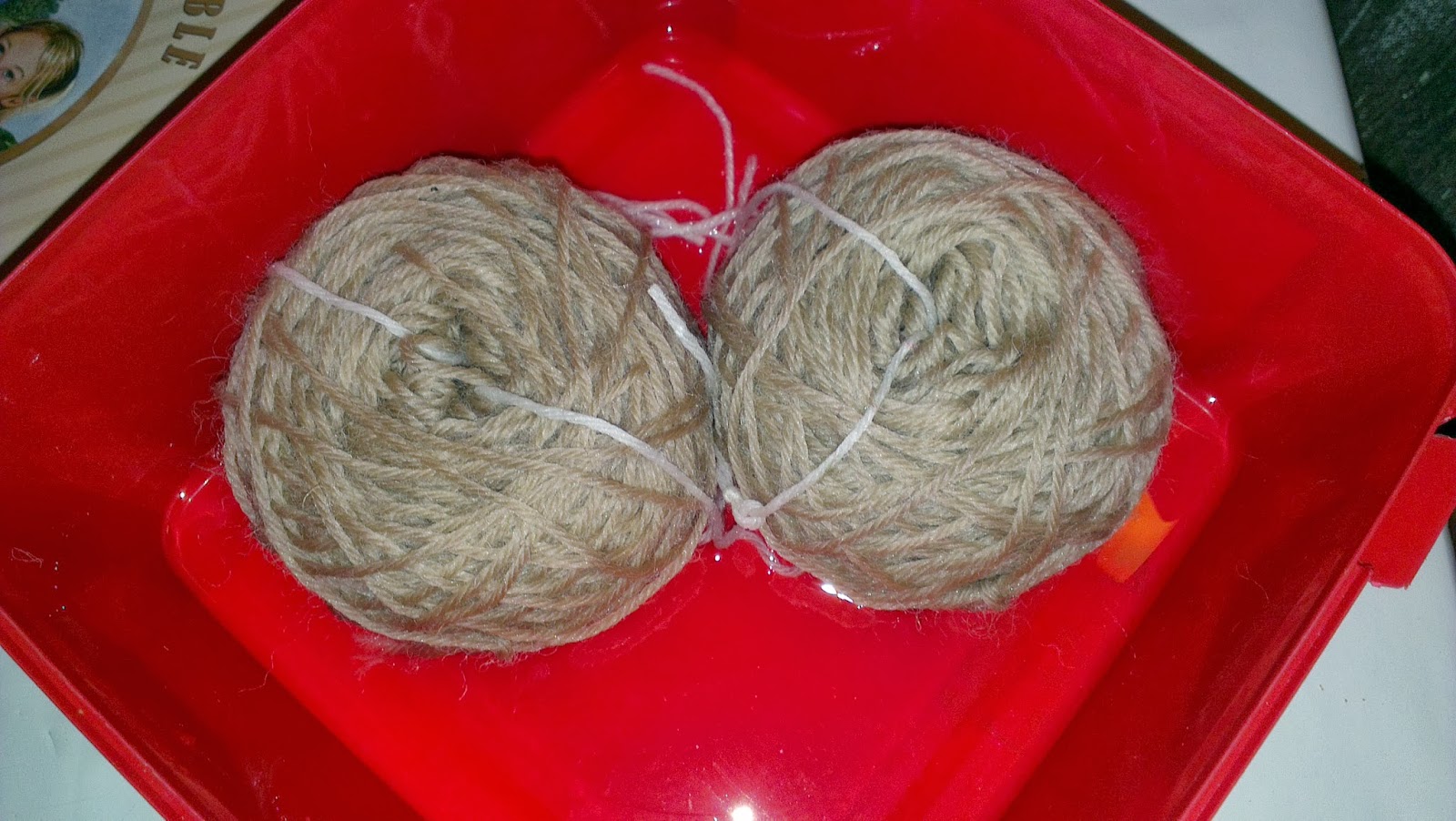 As colors, I decided to blend several Kool-Aid flavours just to test things out. I was dying two skeins and they weren't all white, so the color needed to be more intense. I've allready made a test chart of the colors I had avilable, and decided to go for a mix between Tropical Punch and Strawberry. I had half a package of Tropical Punch lying around so I used up that one first. Thinking that it wouldn't be enough color, I had a package of Black Cherry at hand for the second round of dying, just in case. 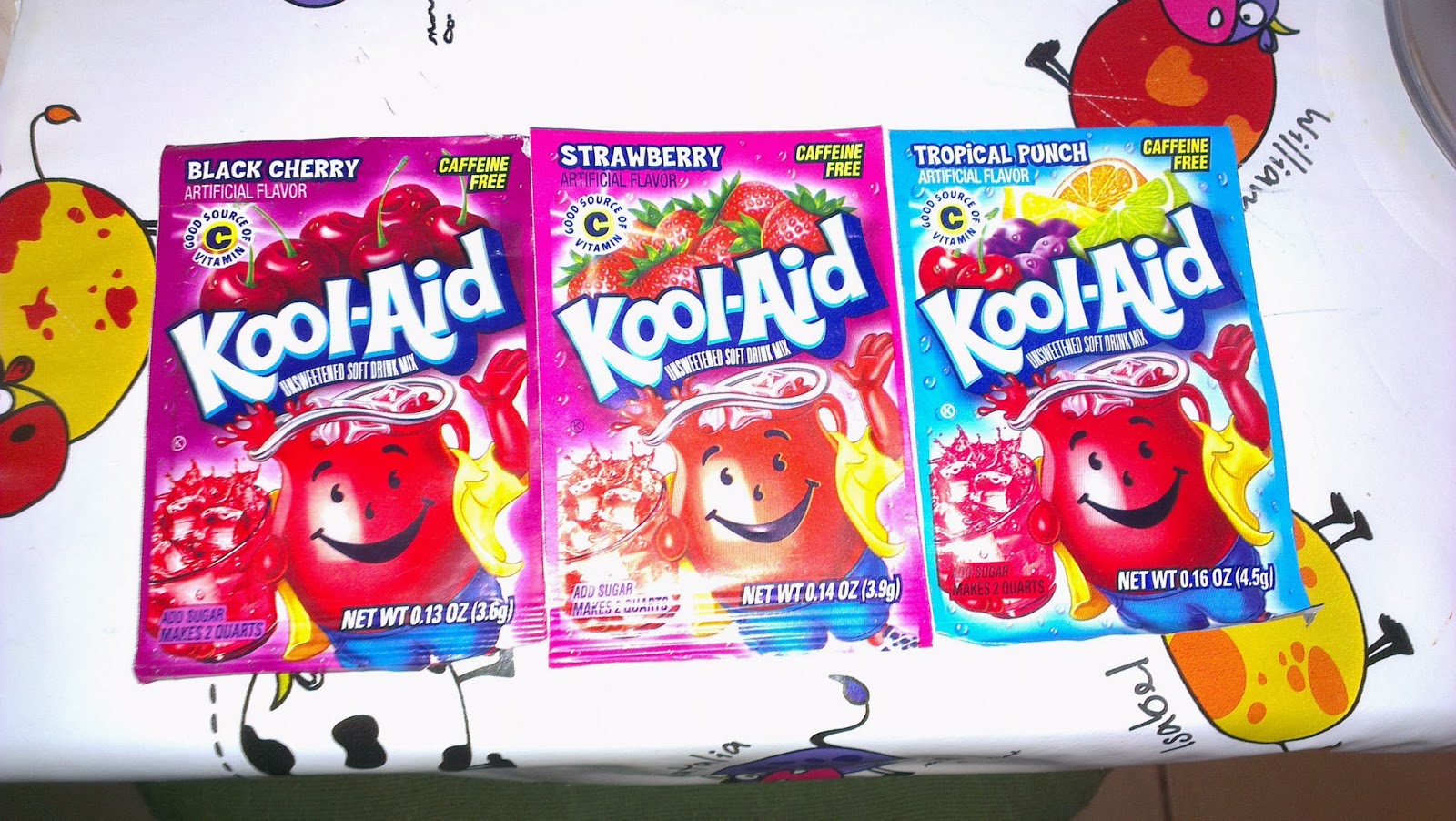 First I added water to the box containing the cakes, I covered them about 3/4 or so. Then I mixed out the Kool-Aid in a different container, just to see the color, before I  poured it over the cakes. And the yarn sucked up the color IMMEDIATELY! Even before I could stick them in the micro, the skeins were blood red and the water was getting clear allready! Crazy stuff! 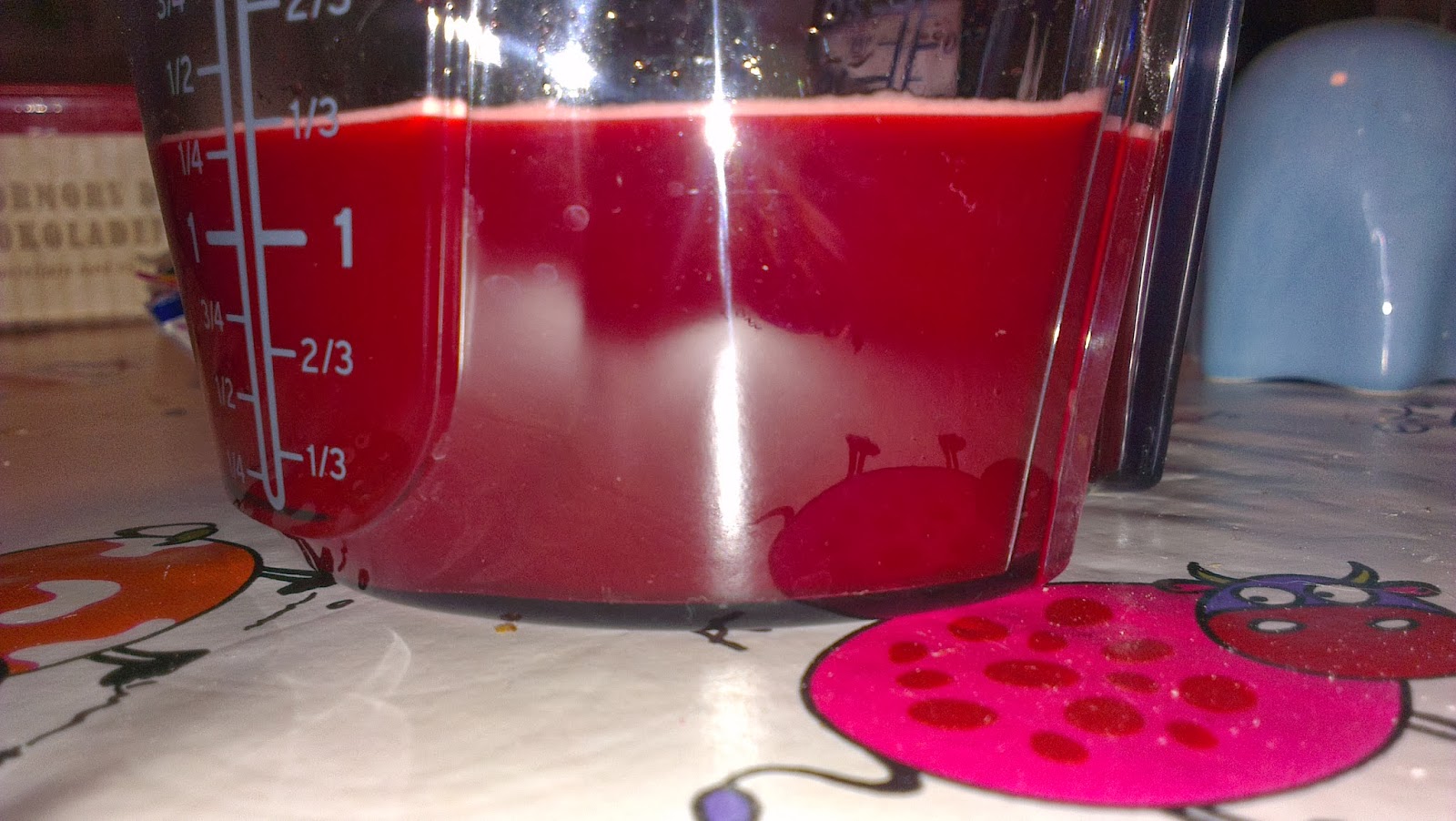 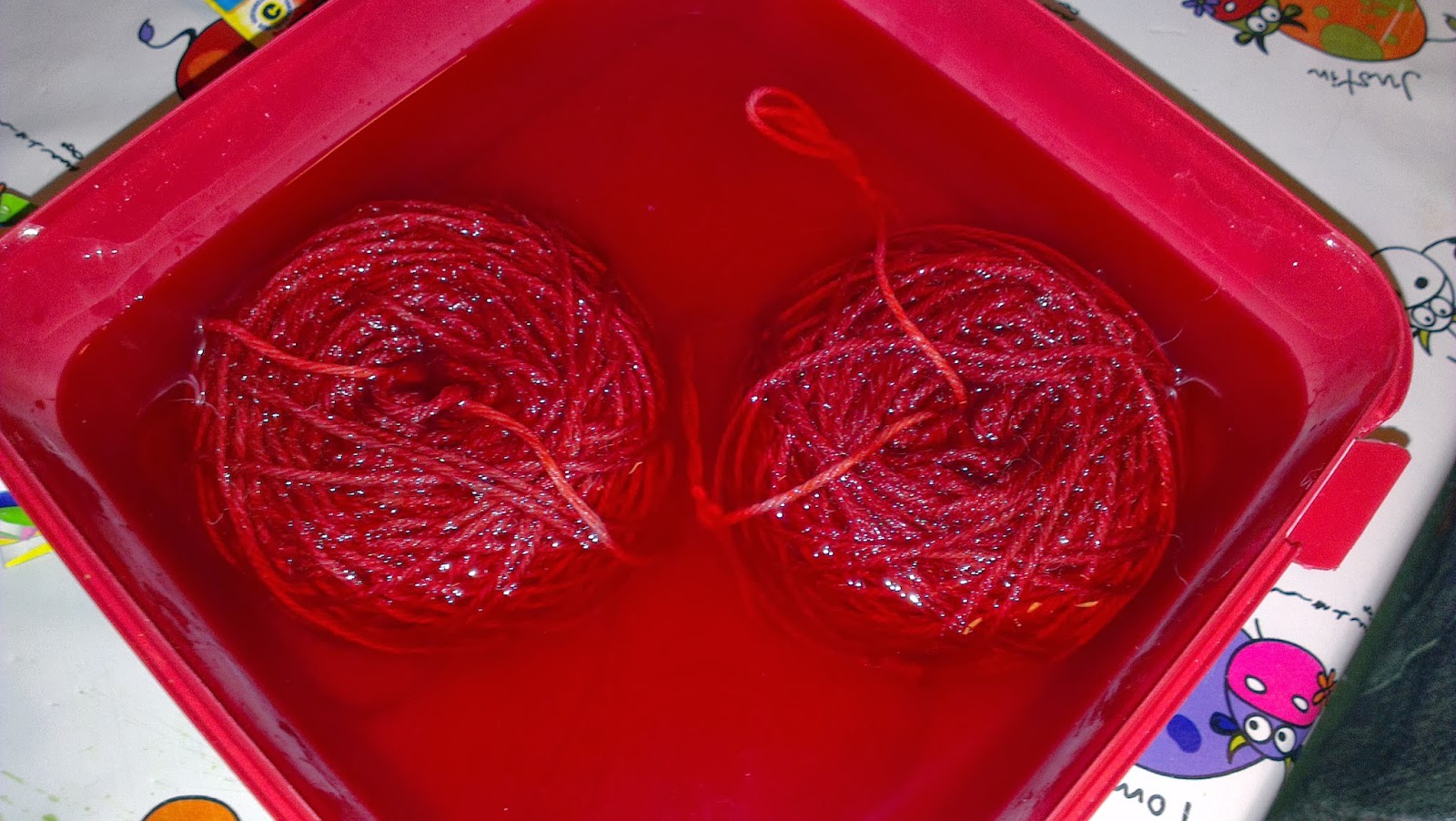 I covered the box with some plastic foil and put the timer on 2 minutes at the warmest level. Then I checked the water, stirred a little and let the yarn rest for a few minutes before I zapped them again for another 2 minutes. 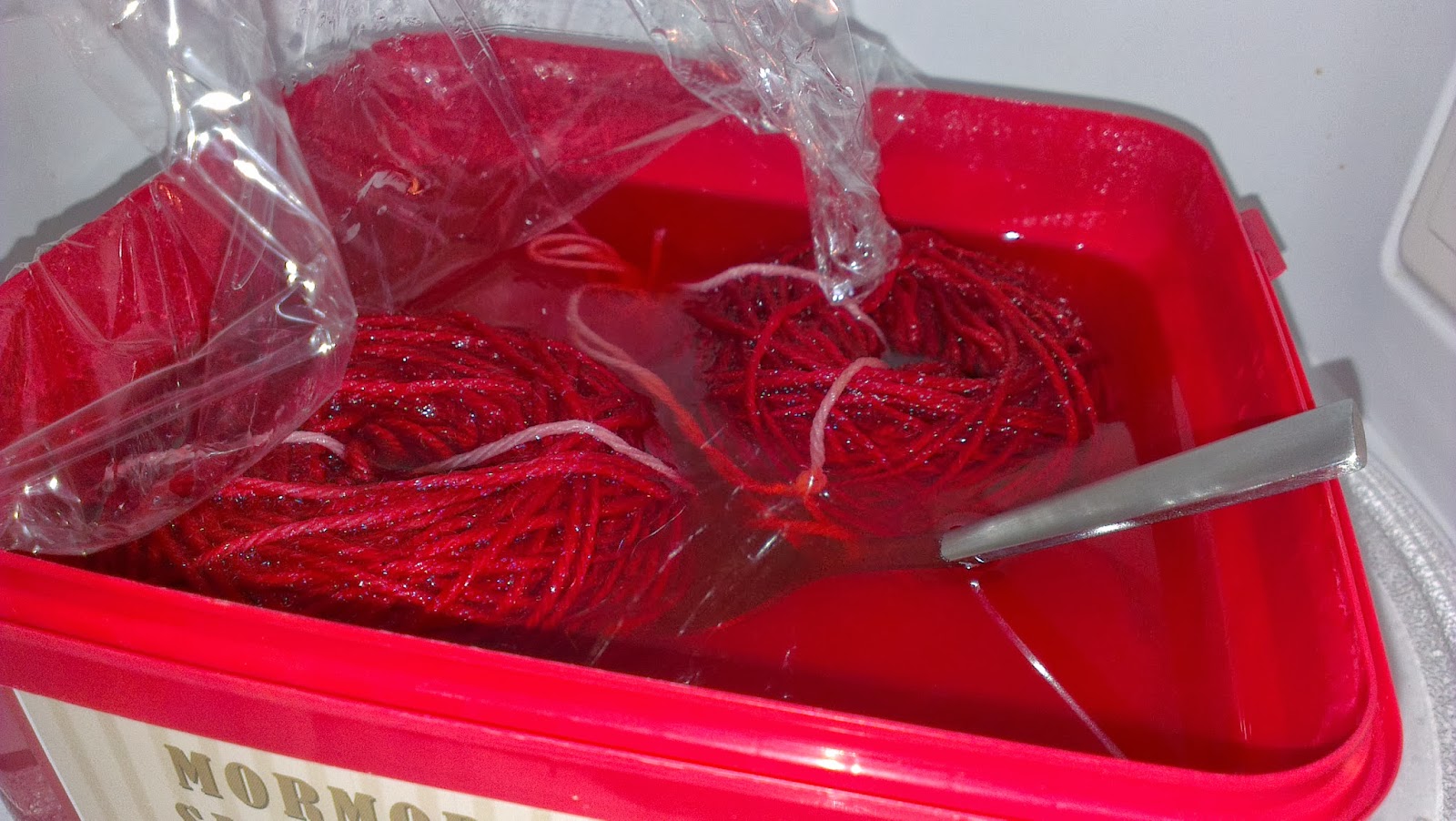 After four times in the microwave, the water still wasn't clear, but after another time, I figured that it probably wouldn't get clearer. I used crazy vibrant red color, so I shouldn't expect it to get all clear. But usually, you know your yarn is finished dyed when the water turns clear.

Then I let the cakes sit in the water until it had cooled, before I took them out and washed them up with some mild soap. Do not let the yarn go from warm to cold water too fast. It will shock the fibers and the yarn will felt. 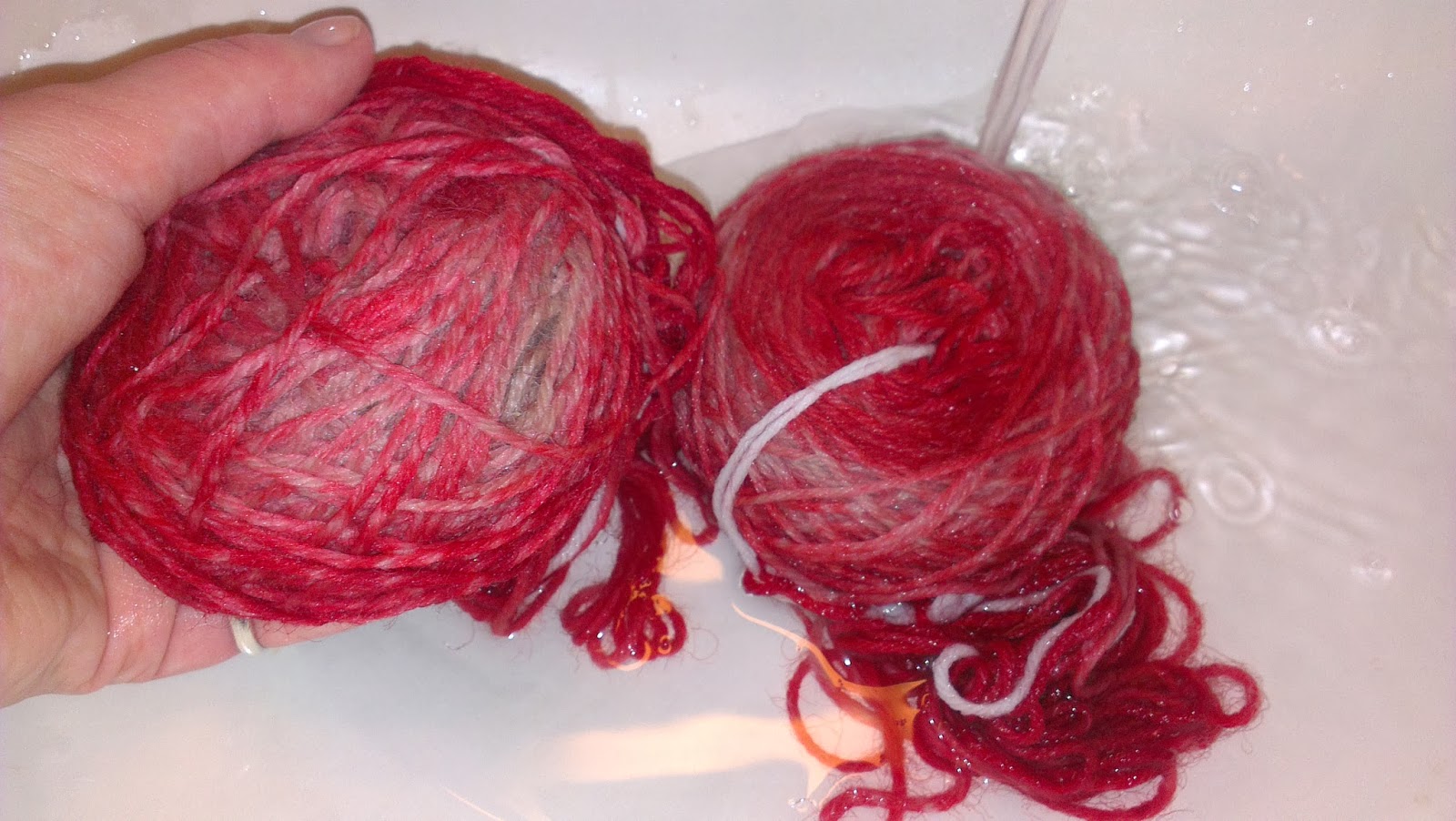 After a good rinse, I squeesed out as much water as possible before placing them on a towel to soak up some more of the moisture. Afterwards I let the air dry over night. 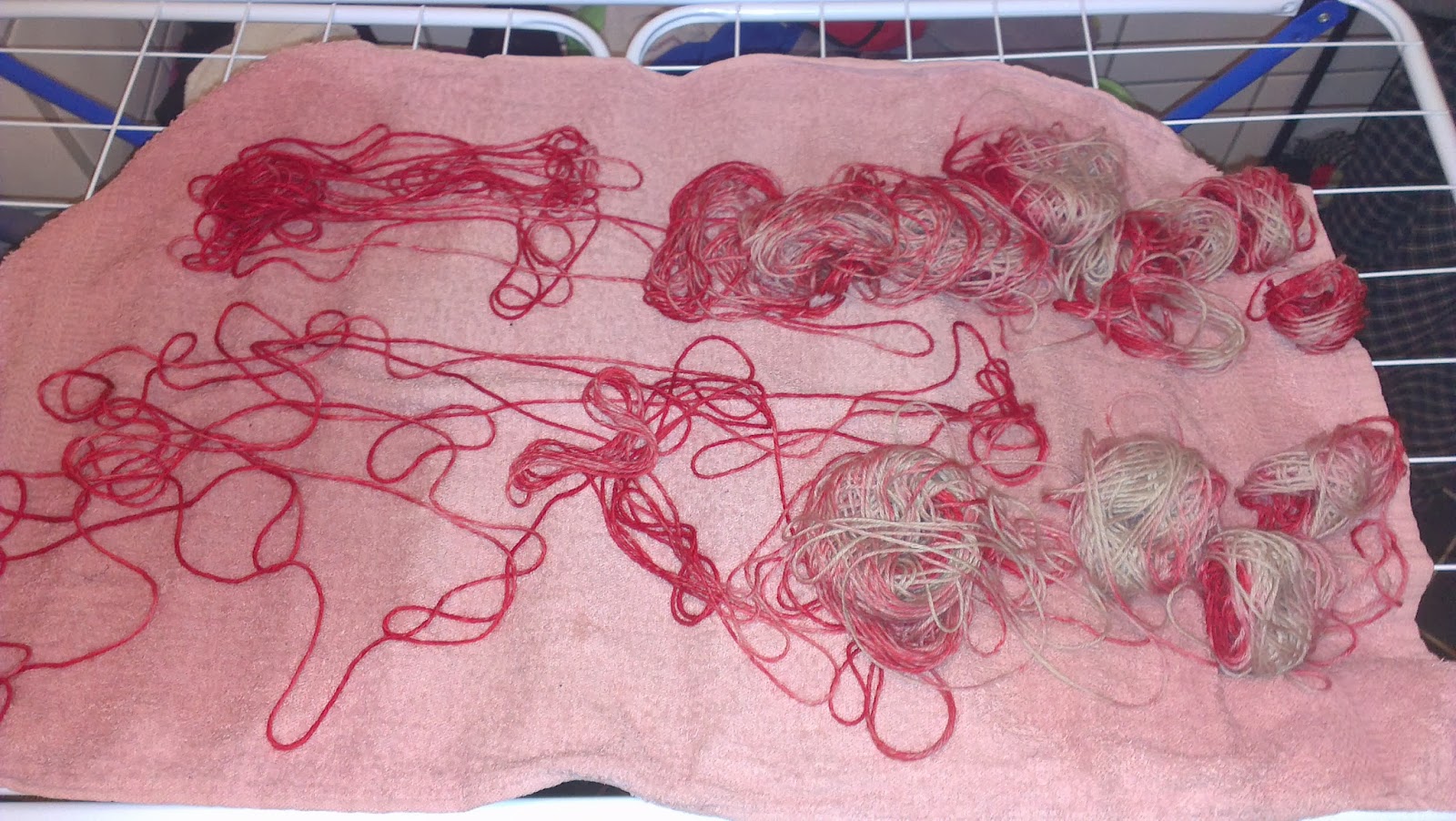 As you can clearly see in this last picture, the dye didn't go through all of my yarn...which I originally didn't want, but I still want some more color than this. Right now, the yarn is self striping pretty much. So I rolled both skeins up to a cake again and I will try to dye them again with the Black Cherry one to hopefully get ridd of more beige that way. 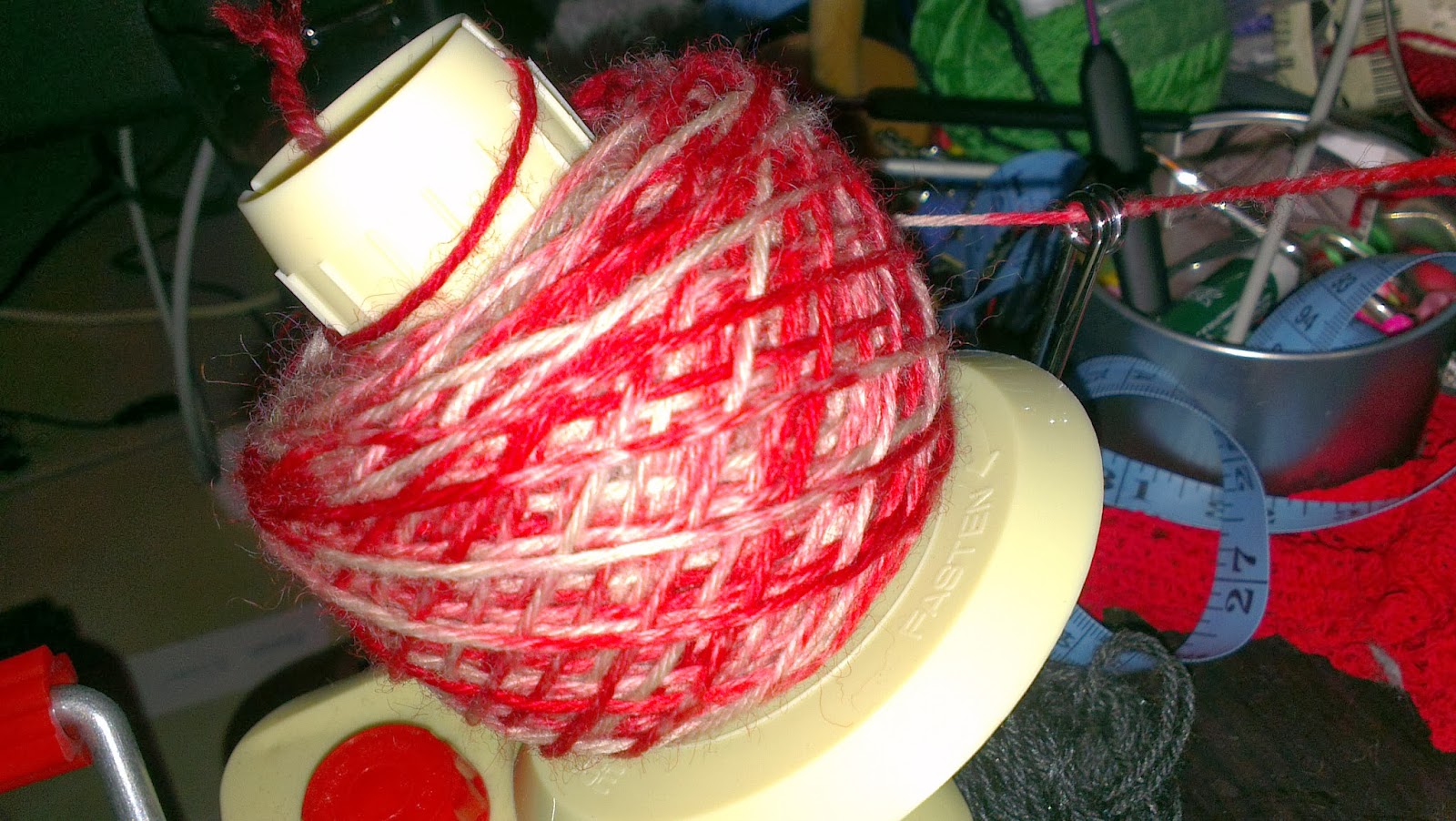 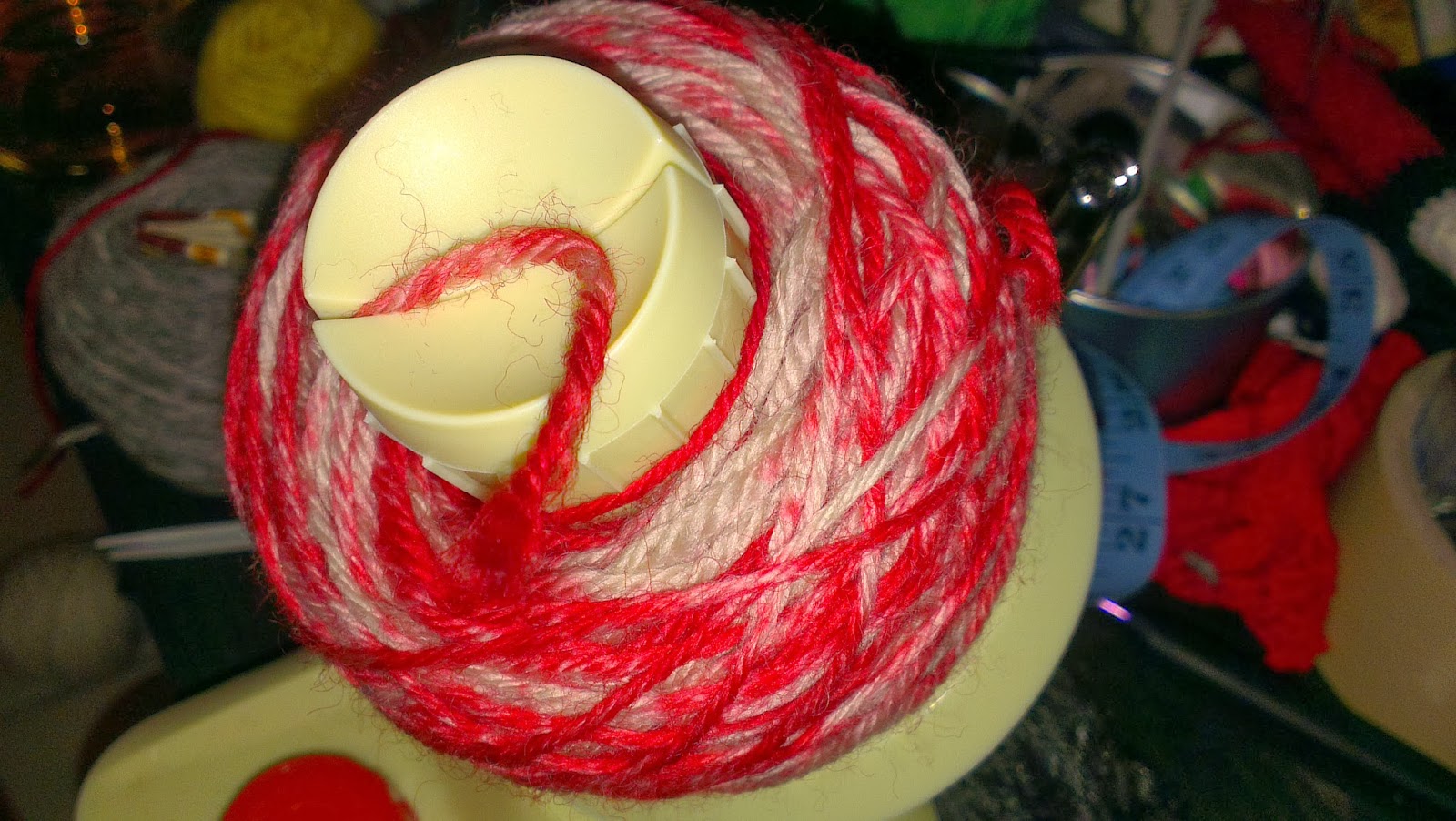 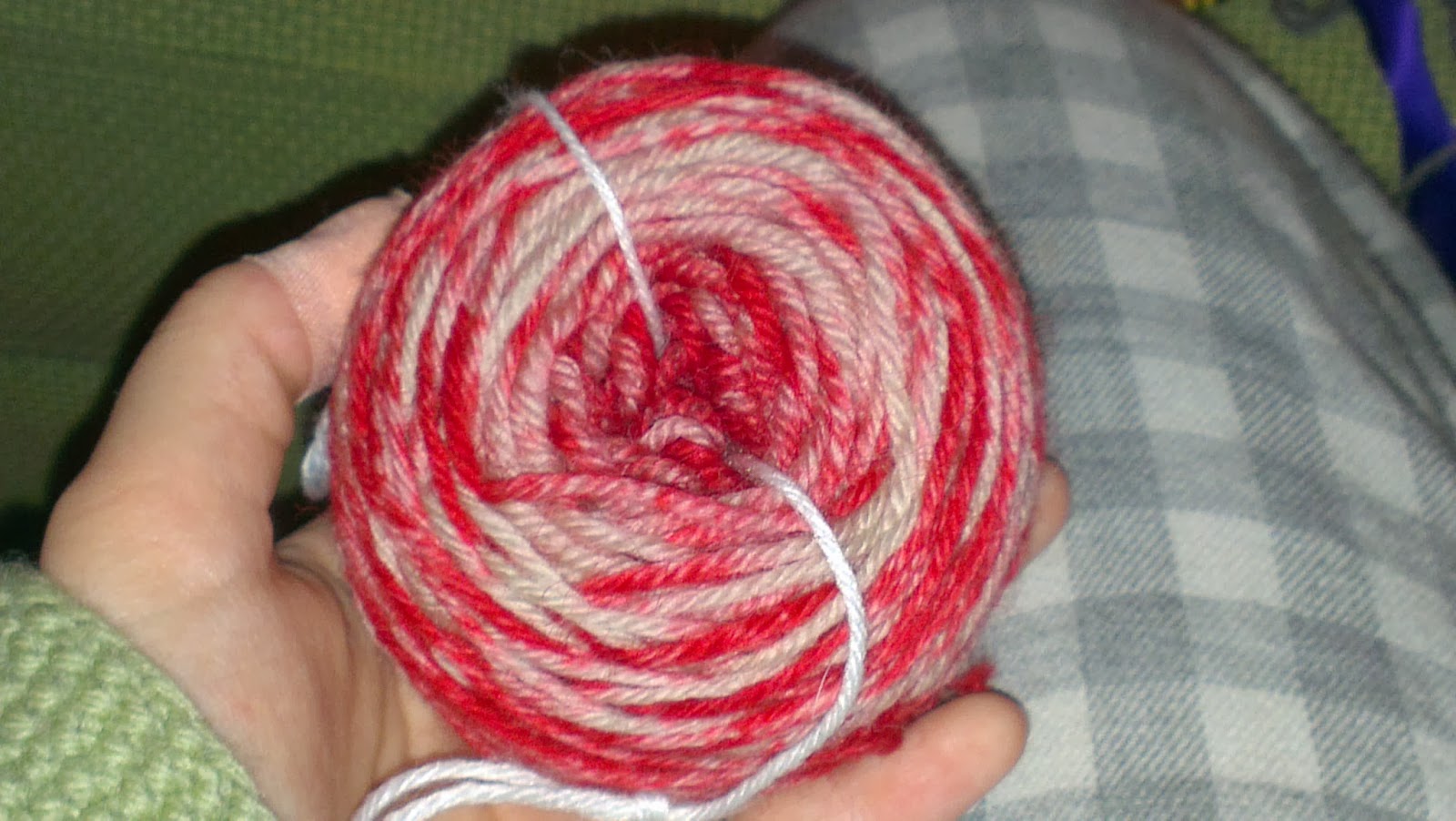 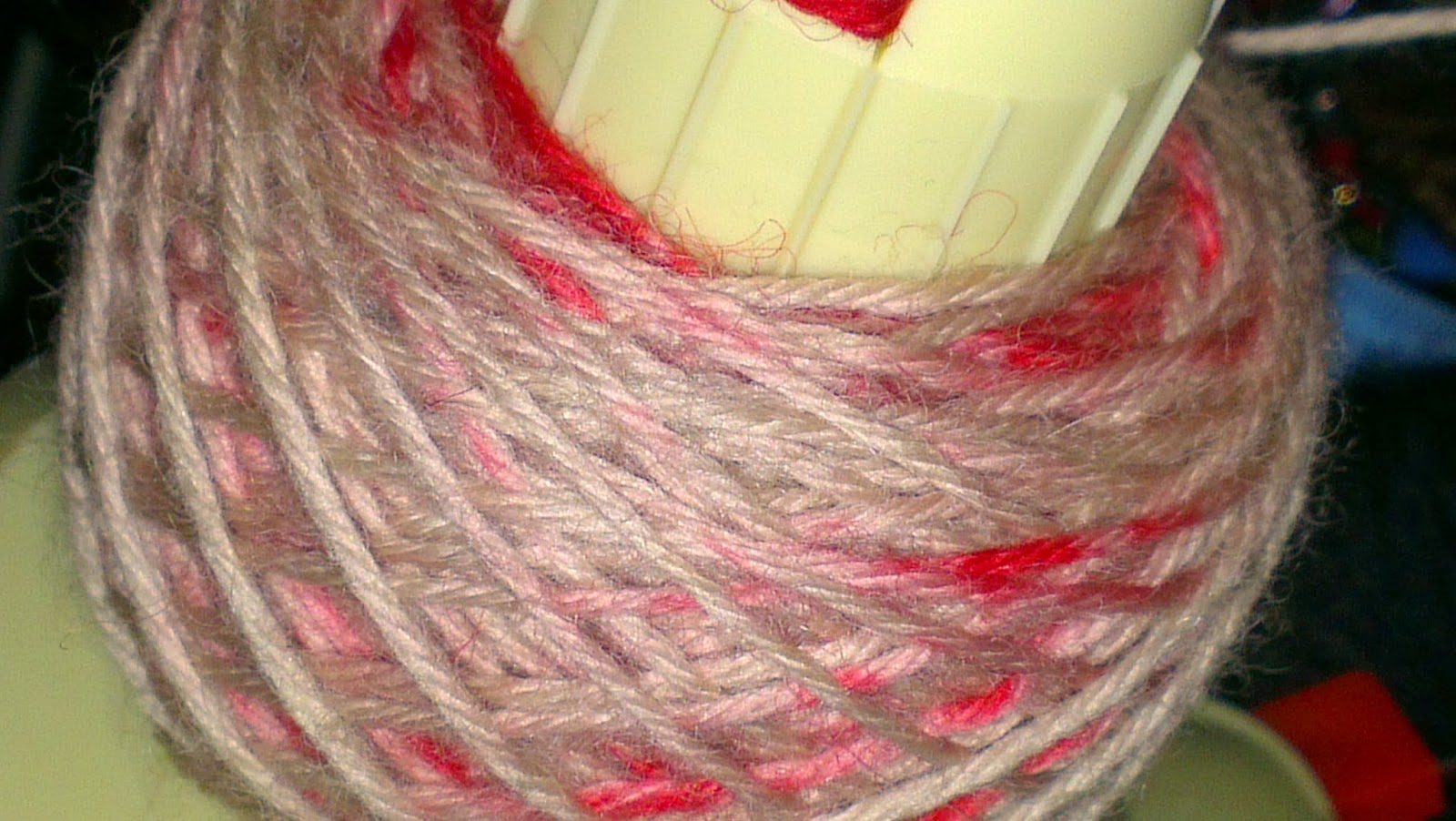 I will keep you posted on that matter though, but for now, I think this blogentry has been long enough... See you all next time around! 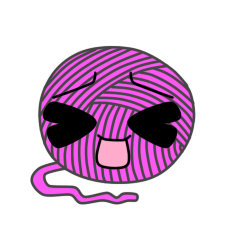